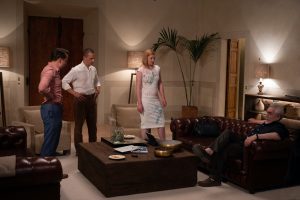 The streamer attributed the success to its combination of HBO hit series, Warner Bros. movies and Max Originals.

Chief amongst the former category was the season three finale of the critically acclaimed Succession. The finale delivered a series-high across all platforms, with total viewing increasing 47% versus the season two finale, 21% from the season three premiere and 8% from the prior week’s episode.

Warner Bros. also capped off its year of day-and-date cinematic and streaming releases with The Matrix Resurrections and King Richard. The former closed out December as one of the top four films released on the streamer during a year in which the studio released highly anticipated titles including Dune and the Suicide Squad.

In terms of Max Originals, viewing was dominated by the Sex And The City spin-off And Just Like That… which has consistently been the #1 series on HBO Max in the US, EU and Latin America since its release. Viewership of its most recent episodes on Thursday, December 30th spiked nearly 20% from the week prior for its largest single day audience since debut.

The launches of And Like That… and The Matrix Resurrections have also seen a halo effect, with the originals also seeing increased viewing on HBO Max. The same can be said for the Harry Potter franchise ahead of the launch of Harry Potter 20th Anniversary: Return to Hogwarts on New Year’s Day.

A final success story of the month for HBO Max was the​​ Mindy Kaling and Justin Noble-created half-hour comedy The Sex Lives of College Girls. The series experienced a 76% jump in viewership from its series premiere day performance, and was second in the EU and Latin America among Max Original half-hour series.