Total cumulative paid OTT subscriptions will surpass traditional pay TV in Asia and Oceania this year, according to a new report from Omdia.

According to Omdia, DTVE’s sister research organisation, growth in online video will mainly come from the South-Eastern Asia region, where it is being fuelled by the launch of new low-cost plans by Disney+ Hotstar. 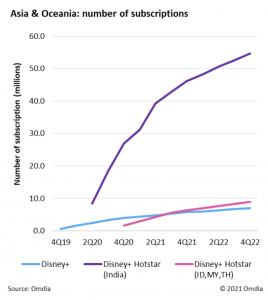 According to Omdia’s calculations, Disney has attracted 5.6 million new subscribers in South-East Asia by the end of Q3, overtaking Disney+ subscriber total for the region as a whole.

The studio has adopted a strategy tailored to the economics of the region, with Disney+ available in developed markets such as Australia and Japan, while Disney+ Hotstar is marketed in developing countries such as India.

““In 2022, online video will overtake pay-TV subscriptions in Asia and Oceania, changing the market for the next decade,” said Jun Wen Woo, senior analyst, TV and online, Omdia.

Online video subscriptions are expected to grow by 28.6% in South-East Asia, compared with 11.2% for Asia and Oceania as a whole.

Disney+ Hotstar is also expected to surpass 50 million subscribers in India by the second quarter of next year.

The service is expected to launch in other countries across the region next year, including the Philippines and Vietnam.

Omdia expects Disney to adjust the price of the Disney+ Hotstar offering in existing markets Indonesia, Malaysia and Thailand later next year, as it did in India in September after capturing 39 million paying customers.

Omdia expects other streamers to follow Disney’s lead to create more flexible plans in markets where competition to streamers is primarily from pirated content.

Despite the growth in streaming, Omdia found that pay TV providers are responding not only by aggregating online video services but by launching additional streaming services such as gaming to their platforms.

The research outfit also found that pay TV remains robust in developing markets including the Philippines, Vietnam and Indonesia.