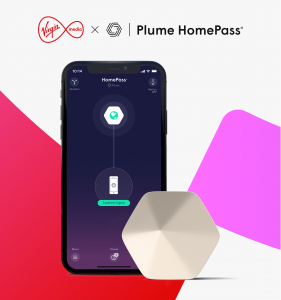 Virgin Media is working with smart home partner Plume to make the latter’s HomePass smart home service available to all UK households including those not covered by the Virgin Media network.

According to Plume, HomePass works with all internet service providers. The service uses cloud-controlled adaptive WiFi pods to create a self-optimising WiFi network throughout the home, offering features such as device security, in-home motion sensing for home security, device management and parental controls.

HomePass is available for an annual charge of £99 and comes with one SuperPod as standard. Additional pods are available starting at £99 each.

HomePass provides a number of smart home features, including motion awareness, and provides real-time alerts if unexpected movement is detected around the home. The system does not rely on cameras but instead works by monitoring disturbances in the WiFi signal.

HomePass will also alert users when connected devices such as smart speakers, baby monitors or doorbells exhibit unusual behaviour such as trying to connect to new unknown connections and put at-risk devices in quarantine.

HomePass is designed to improve WiFi performance by enabling pods to be placed throughout the home to optimise performance and speed in each room for each device.

Sigrid van den Houte, director of products and propositions (fixed & FMC) at Virgin Media, said:“By teaming up with Plume, we’re able to offer a smarter, faster, and safer WiFi experience to everyone – even people living in areas where our services aren’t yet available. With HomePass’ plug and play pods and host of smart home features, we’re excited to be transforming WiFi in homes around the country.”

Christian Constant, chief direct business officer at Plume, said: “Plume is thrilled to partner with Virgin Media to bring the UK smarter, safer, and more reliable home connectivity with HomePass. Now, everyone in the UK can benefit from whole-home WiFi, intelligent device security, personalised parental controls, guest access and motion sensing, even if they are not Virgin Media broadband subscribers.”