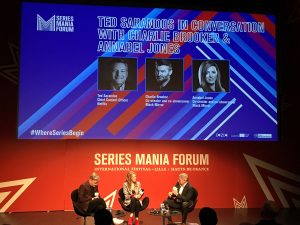 Series Mania, which recorded 54,000 visitors to its festival and 2,500 accredited to attend the Series Mania Forum, the event’s professional element, has announced dates for next year.

Laurence Herszberg, founder and general director of the show, announced that the next event will be held from March 18-25 with the Series Mania Forum set for March 22-24.

The Lille Dialogues, one one-day summit which bring together European lawmakers and international TV industry leaders to encourage joint reflection on the challenges facing the industry and to promote international cooperation, will be held March 24.

The return of the physical event saw 20,000 take part in elements of the event excluding screenings, such as workshops and the Crédit Mutuel Village Festival.

“As we close the doors to this fantastic 2021 edition, we warmly thank the public and the professionals who came in large numbers here, but also want to salute the tremendous welcome from the city of Lille and the unwavering support of the Hauts-de-France Region, a territory committed to the audiovisual sector,” said Herszberg. “We are delighted to be announcing our new dates for 2022 and look forward to returning to the month of March which is the perfect timeframe for Series Mania.”