UK streaming subscriptions rose by 50% during 2020 to reach 31 million, meaning that 60% of homes had a paid-for streaming service by the end of the year, according to Ofcom’s latest annual survey of media habits. 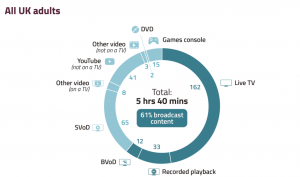 According to the survey, some 52% of UK homes now have a Netflix subscription, exceeding the number that take a pay TV service, which stands at 48% combined.

UK adults spent an average of five hours and 40 minutes watching TV and online video during 2020, 47 minutes more than in 2019, according to the regulator. People spent twice as much time watching subscription streaming services – 65 minutes a day – than in 2019.

While broadcast viewing was up by nine minutes to three hours 12 minutes a day, this was driven entirely by the over 45s. Collectively 16-24s spent only one hour and 17 minutes watching broadcast content in any form, down from one hour and 21 minutes for the prior year.

High-profile sports events continued to attract a mass audience, with the one-off of the Euro 2020 final between England and Italy attracting 22 million viewers for the BBC and ITV.

“TV and online video have proved an important antidote to lockdown life, with people spending a third of their waking hours last year glued to screens for news and entertainment,” said Yih-Choung Teh, Ofcom’s group director, strategy and research

“The pandemic undoubtedly turbo-charged viewing to streaming services, with three in five UK homes now signed up. But with subscriber growth slowing into 2021 and lockdown restrictions easing, the challenge for the likes of Netflix, Amazon and Disney will be to ensure a healthy pipeline of content and keep customers signed up.”