Spain’s CRTVG teams up with Telefónica for 5G broadcast 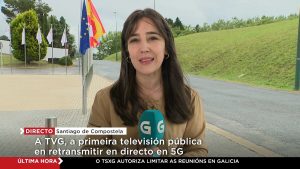 The live transmission took place on Friday during CRTVG’s transmission of the Telexornal Melodia from Monte do Gozo, where the broadcaster interviews a number of pilgrims on the Camino de Santiago heading for the Galician capital of Santiago de Compostela for the celebration of St James’ Day.

Telefónica connected a camera via 5G using a backpack provided by Mobile Viewpoint BV equipped with 5G modems to deliver video encoded in H.265 for live transmission in HD.

Telefónica said that the transmission followed a year of trials that had resulted in the capability of delivering a live stream over 5G with a reduction in latency to up to 0.8 seconds, or 25% less than the normal broadcast latency.

The telco said that the pilot was part of a set of 5G initiatives led by the Galician regional government’s Axencia para a Modernización Tecnolóxica de Galicia (Amtega) to place the region at the forefront of the development of mobile broadband technology.

Sara González, director of technology and media support at CRTVG said that “the drive for innovation of the Corporación Radio e Televisión de Galicia is being realised in projects like this, with the exploration of new technologies that can be applied to improve our live broadcasts and retransmissions”.

She said that the use of 5G “will enable us to improve the reliability of retransmissions, improve the quality of the transmitted image thanks to its great bandwidth and reduce latency”.