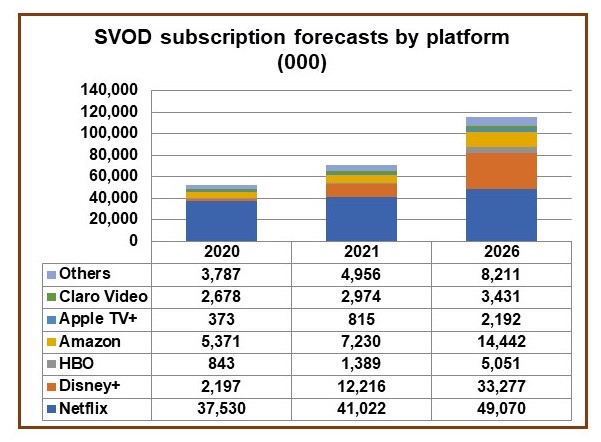 Latin America is set to more than double its total SVOD subscriber base within five years.

According to Digital TV Research, the region will have 116 million SVOD subscriptions by 2025, up from the 53 million recorded at the end of 2020.

While the market will continue to grow, it will be dominated by US players. Netflix, Amazon Prime Video, Disney+, Apple TV+ and HBO Max will account for 90% of the region’s paying SVOD subscribers.

Simon Murray, Principal Analyst at Digital TV Research, said: “There will be a wave of major SVOD platform launches in Latin America during 2021. Paramount+ will start in March, followed by HBO Max and Star+ in June. Discovery+ is also expected expand in the region.”

The report contrasts with a study published last week by Digital TV Research which estimated that the pay TV industry will struggle in the coming years.