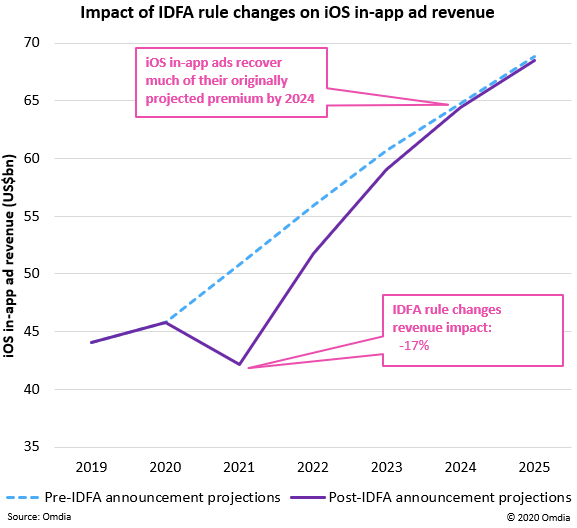 The in-app Apple iOS advertising market is set to lose a fifth of its value in 2021.

According to a new report from Omdia, a number of privacy rule changes designed to protect users will depress the market.

The analyst notes that 17% will be wiped off the value of the iOS in-app ad market in 2021, with over a third of this shortfall will be revenue lost to other forms of advertising or held back.

Perhaps concerningly for Apple, much of this revenue will shift over to Android, as iOS ads lose almost 60% of their premium over their Android counterparts. The privacy changes which include the loss of attribution and targetability, the analyst says, should lead to higher demand and prices for Android ads.

The report however notes that iOS users are still highly coveted by advertisers, due to the fact that iPhone and iPad users spent an average of 4.7 times more on apps than Android users in 2020.

Escofet said: “Marketeers and ad-tech platforms will do their best to find workarounds to the lack of IDFA data. And Omdia expects that, by 2024, iOS in-app ads will have recovered much of their originally projected premium.”