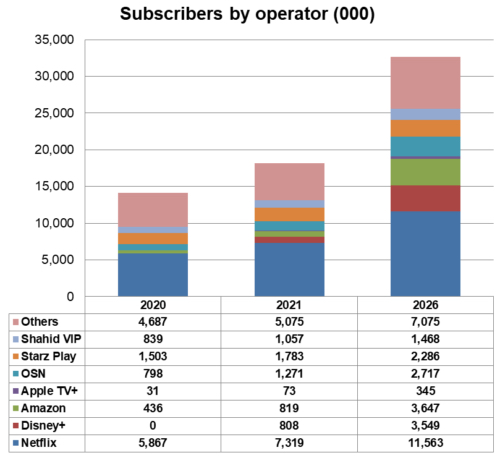 The MENA region will see SVOD subscriptions increase to more than 30 million by 2026.

According to a new report from Digital TV Research, the 20 countries in the Middle East and North Africa region will have 32.65 million SVOD subscriptions by 2026, up from the 14.16 million recorded at the end of 2020.

Turkey will remain the market leader by a considerable distance, with nearly 14 million subscriptions by 2026.

Simon Murray, principal analyst at Digital TV Research, said: “Netflix and Disney+ will account for about half of the region’s total by 2026, despite Disney+ only starting in 2022 in a limited number of countries. Due to exclusive deals with Disney+, HBO and Paramount+, OSN will quickly gain subscribers.”