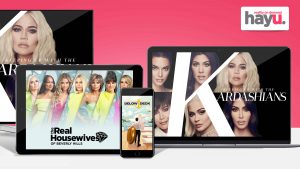 NBCUniversal’s reality programming subscription video-on-demand (SVOD) service hayu has launched in Germany and Austria and is available on Amazon Prime Video Channels via the Prime Video app on mobile, tablet, connected TVs and the web.

hayu offers reality TV content including Keeping Up With the Kardashians and its spin-offs along with The Real Housewives, and Below Deck franchises.

The service offers a variety of unscripted sub-genres in English language including: Home and Design, Dating, Cooking, Crime, and Fashion. The majority of US shows are available on hayu the same day as their US broadcast.

Amzon Prime members in Germany and Austria will gain access to hayu with an add on subscription of €4.99 per month, with a 14-day free trial, while a temporary VAT reduction in the country means it will be available for €4.86 a month from now until the end of the year.

hayu is now available in 16 territories, having launched in the UK, Ireland and Australia in March 2016, followed by Norway, Sweden, Finland and Denmark in November 2017. The most recent territory expansion includes Canada in September 2018, followed by the Benelux in December 2018, and Southeast Asia – The Philippines, Hong Kong and Singapore – in October 2019.

“We are thrilled to launch hayu – and its world-renowned reality TV content – in Germany and Austria. Already the premiere destination for must-watch reality TV in 14 markets, hayu is expanding its footprint and building on its successful, multi-territory partnership with Amazon Prime Video Channels bringing the best reality TV to super fans of the genre.” said Hendrik McDermott, managing director, hayu.