Perennial crowd pleaser The Mandalorian continues to prove a hit with audiences in Belgium following the debut of Disney+ in September, says Parrot Analytics. 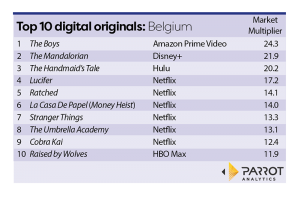 Disney+ continued its European expansion in the middle of September, finally reaching audiences in Belgium. The streamer’s popularity has been reflected in Parrot’s analysis of SVOD audience demand data for the week ending October 4, with flagship show The Mandalorian seeing 21.9 times the demand of an average show. The Star Wars live actions series narrowly missed out on the top spot to Amazon’s dark superhero satire The Boys which continues to compel audiences with 24.3 times the demand of an average series.

Hulu’s bleak dystopian adaptation The Handmaid’s Tale sits in third with 20.2 times the demand of an average series, while HBO Max’s big budget Raised By Wolves also features on the list.

The rest of the chart is dominated by Netflix, which picks up the remaining six spots. These include familiar favourites like Lucifer, La Casa De Papel and Stranger Things along with Ryan Murphy’s latest project Ratched and Cobra Kai, the series which originated as a YouTube original series before being acquired by Netflix.