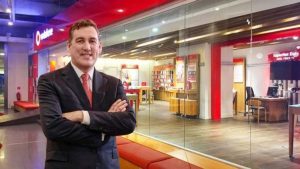 Vodafone España has named Colman Deegan as its new CEO, effective from November 1. Deegan, currently head of Vodafone Turkey, will replace António Coimbra, who will continue to work with the operator in a non-executive role.

Deegan, an Irish national, joined Vodafone Group in 1998 and held a number of positions in finance and M&A along with roles in India and Italy before becoming chief executive of the Turkish operation in 2016.

Coimbra, who joined Vodafone Group 28 years ago as commercial director of Telecel – now Vodafone Portugal – has headed up Vodafone in Spain for the last eight years, overseeing the integration of cable operator ONO in 2014 to create the first fully convergent operating company in the Vodafone group.

According to Vodafone, Coimbra will play a role in ensuring a smooth transition, helping Deegan to understand the dynamics of themarket and working with the executive committee in the area of institutional relations and the company’s relationship with major clients and public bodies.

Vodafone España has undergone a challenging three years, with a drift towards intensive price competition and the loss of football rights after it decided the cost demanded by rights-holder Telefónica was too high.