African SVOD market to grow by five times by 2025 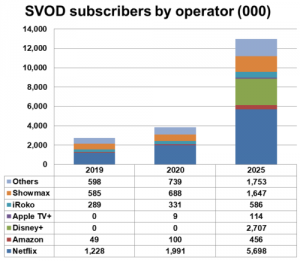 Africa will see significant growth in SVOD as the nascent market continues to mature to a total of 12.96 million subscriptions by 2025.

According to Digital TV Research, this will be a growth of almost five times – up from 2.75 million at the end of 2019.

South Africa will be the largest single market, adding 3 million subs to a total of 4.3 million by 2025. Nigeria meanwhile will also see significant growth, adding 2.1 million to total 2.73 million by the decade’s mid-point.

Showmax, currently with 585,000 subscribers, will cement its position as the third-largest platform with 1.65 million subscribers.

Simon Murray, principal analyst at Digital TV Research, said: “Local player Showmax will add more than a million paying subscribers, partly due to the launch of its Pro platform and its lower prices for mobile subscribers. It will reach many more homes as a free extension for its pay TV subscribers.”

The ‘others’ category which contains niche and smaller local streamers, will be at a total of 1.75 million subscribers.