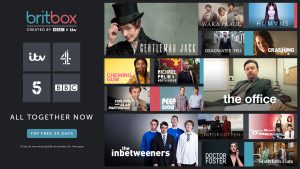 UK SVOD streamer BritBox is performing well as it prepares for the debut of its first original content and ramps up plans for international expansion, according to senior executives behind the project.

“We are very happy with how the performance has gone,” said Will Harrison, managing director of BritBox UK at a Broadcasting Press Guild ‘virtual lunch’ event. He said that the service has expanded its reach through launches on multiple devices along with the addition of new features, including the debut of an annual subscription plan for a more competitive price point.

Harrison said that BritBox has been preparing its slate of originals, set to kick off on Saturday with the reboot of satirical puppet show Spitting Image.

The Beast Must Die, a second original, a drama series based on a 1938 novel by Cecil Day-Lewis that was also filmed in 1974 by Claude Chabrol (Que la bête meure) is currently undergoing production on the Isle of Wight.

Harrison said that BritBox had received a boost from the COVID pandemic which has been sustained. He said that average viewing rates had increased during the pandemic but the timetable for production had been impacted. However, he said that Spitting Image had been one of the first shows to go into production during the lockdown.

Harrison said that having a catalogue was good for retaining subscribers, but original commissions had a “subscriber acquisition role to play” for SVOD services.

He said that BritBox would look to develop its original slate more widely. Harrison said that BB would join up with “sister businesses in other markets” as its international rollout developed, to create shows.

Harrison said that BritBox had also just launched FilmFour on the service, having signed up Channel 4 earlier this year, with plans to ramp this up to 50 films.

Harrison said that the expansion of catch-up windows for iPlayer and ITV Hub meant that BritBox was also looking at non-exclusive content. However, he said that two thirds of content remained fully exclusive “so we can live with a bit of overlap”. He said that BritBox could also act as a repository of complete box sets while the catch-up services.

In relation to distribution, Harrison said that BritBox was focusing primarily on developing direct relationships and device rollouts rather than developing relationships with platforms. However BT is launching an offer to broadband subscribers in October with Britbox for six months for free he said.

Speaking at the same event ITV group director, SVOD, Reemah Sakaan said that BritBox now had access to a good pipeline of content. She said that Channel 4 and Five, which supply programming to the service but are not shareholders, were increasingly taking second window rights that they could syndicate to BritBox, even though they didn’t have the same ownership of content as the BBC, for example.

Addressing plans to ramp up the service’s international presence, she said that BritBox would primarily target English-language entertainment markets including large ones such as India as well as “passion”-driven markets such as the Nordic territories. She said that the JV would look at different structures depending on the specific opportunity, with some potentially taking a B2B2C form rather than a direct D2C approach.

She said that BritBox was “focused on moving as fast as we can” internationally.

Asked by DTVE about BritBox’s proposition in markets where its JV partners also have an opportunity to license content directy to third parties, Sakaan said that the service could offer a broad tapestry of content, including theatre and live performance as well as archive series.

She said that the line-up in each market would depend on a number of factors including the local affinity and appeal of the service and the gap in the market in terms of the availability of British content in each territory.

She said that BritBox’s parentage gave it access to knowledge about BBC and ITV commissions and enabled “upstream and advanced conversations” that ensured that “the pipeline can be a bit more predictable”.

In the long term, she said, BritBox would have access to more content as existing deals expire.

“In the US there wasn’t a dedicate home for British content and there was a lot that had never been seen, and we launched day and date. In Canada [British content] is better distributed and we have a different line up. Australia is somewhere in the middle. It varies by market,” she said.

Harrison added that “the more markets you launch in the more scale you have”, which will deliver “more opportunity to do multi-territory deals”.