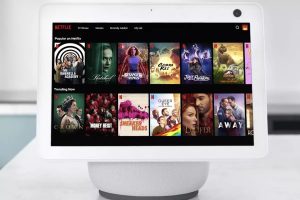 At its 2020 hardware event, the ecommerce giant said that its smart display devices will finally receive access to Netflix, with the streamer adding to services such as Hulu, Prime Video and Tubi.

The absence of market leading Netflix had irked many users, especially with voice-activated smart displays like the Echo Show and Google Nest Hub becoming cheaper alternatives to a small TV for kitchens and kids bedrooms.

Now with the newly announced US$249.99 Echo Show 10, Netflix will be integrated into the device, with users able to use their voice to search for and start shows and movies.

Barry Smith, partner engagement manager at Netflix, said: “Improving our member experience includes making Netflix available where people want it. We’re excited to partner with Amazon on bringing the Netflix experience that people know and love to Echo Show, making it easier for our members to browse their favorite shows and films using their voice.”

Unfortunately it would appear that users of older Echo Show devices will miss out, with it being likely that only users of the new Echo Show 10 will be able to access Netflix.

Amazon also announced a number of upgrades to its entire Echo line of devices at the show, including several key improvements to voice assistant Alexa.