US set for ‘historic’ cord-cutting 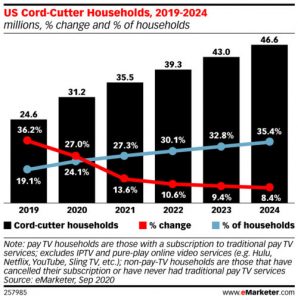 The US pay TV industry will suffer ‘historic’ cord-cutting in 2020.

According to a new report from eMarketer, 31.2 million US households will have cut the cable TV cord, with 6.6 million cancelling their pay TV subscriptions. This, the researcher says, will represent the biggest single year pay TV loss on record.

eMarketer forecasting analyst at Insider Intelligence Eric Haggstrom, said: “Consumers are choosing to cut the cord because of high prices, especially compared with streaming alternatives. The loss of live sports in H1 2020 contributed to further declines. While sports have returned, people will not return to their old cable or satellite plans.

“As pay TV subscriber losses accumulate, cable providers have been focusing on their internet services, which are more profitable and have benefited from the consumer shift to streaming video.”

The report added that this loss will be coupled with a ‘major hit’ to TV ad spend, dropping 15% in 2020 to US$60 billion. This will be the lowest total the industry has seen since 2011.

Haggstrom added: “While TV ad spending will rebound in 2021 with the broader economy, it will never return to pre-pandemic levels. Given trends in cord-cutting, audience erosion, and growth in streaming video, more ad dollars will shift from TV to digital video in the future.”