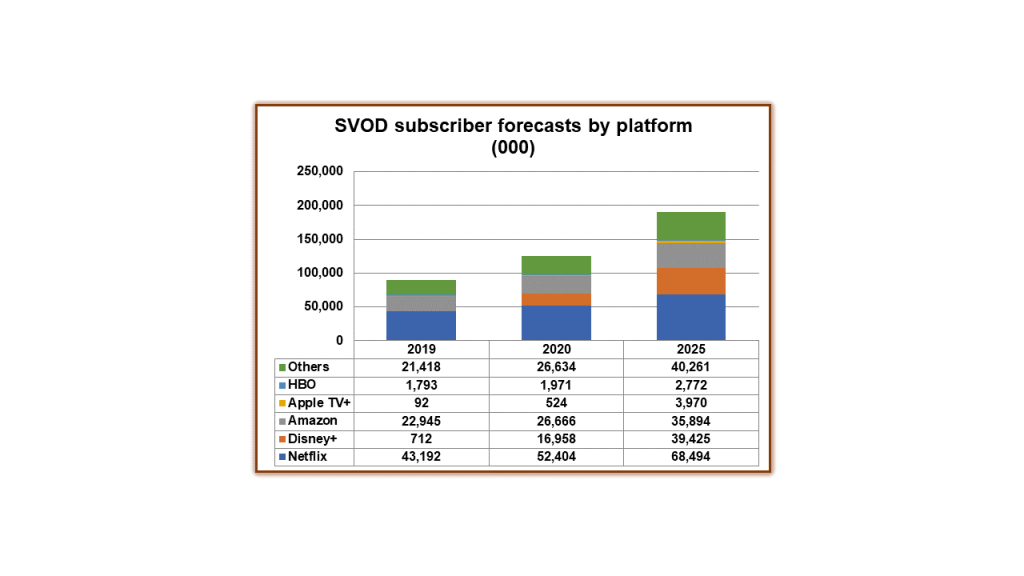 According to the latest stats from the researcher, the region will reach 191 million SVOD subscriptions by the mid-point of the decade – representing an increase of more than double from the 90 million recorded at the end of 2019.

The firm expects that the Covid-19 pandemic and subsequent lockdowns across the continent will be a significant reason behind the addition of 35 million subs in 2020.

Unsurprisingly, Netflix will continue to be the largest platform in the region with 68.49 million – a net add of 25 million subscribers. Despite reinforcing its position at the top of the tree, Netflix will still lose market share to emerging platforms.

Disney+, which last week completed its Western Europe rollout in the Nordics and Benelux, is expected to overtake Amazon Prime Video as the second-largest streamer with just shy of 40 million subscribers by 2025 – up from 712,000 at the end of 2019 when it was only available in the Netherlands. It is expected to hit 17 million subs by the end of 2020.

Apple TV+ and HBO meanwhile will see growth to 4 million and 2.8 million respectively, though this represents a much bigger jump for Apple, which ended 2019 with 92,000 subs.

Second only to Netflix is the ‘other’ category, which Digital TV Research principal analyst Simon Murray explained is “due to the wave of launches due from the likes of Hulu, Paramount+ and Peacock.” That category is expected to almost double from 21.4 million in 2019 to 40.3 million in 2025.

Murray added: “Disney+ will have a huge impact. However, we have downgraded Disney+ since our last forecasts in April. After strong early take-up and based on its June results, subscriber growth will decelerate rapidly.”

This latest report also puts into stark contrast the difference in SVOD proliferation between West and East in Europe. Eastern Europe, Digital TV Research previously said, would only reach 26 million SVOD subscribers by 2025 – representing less than 15% of the Western Europe total.