Pair get promotion at Blue Ant 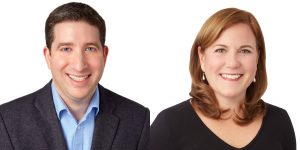 Blue Ant Media has announced a pair of promotions for Jamie Schouela and Carlyn Staudt.

Schouela has served as president of Canadian Media, overseeing the entire Canadian business, since 2017, and has been handed a new title of president of global channels. He will be charged with leading the company’s streaming and linear television networks and digital platforms around the world, as well as Blue Ant Media’s existing print products and consumer events.

Staudt is formerly EVP, programming and development for family-friendly wildlife brand Love Nature. Her role has now been expanded to see her head up Love Nature’s strategic direction and operations globally, including commissioning and development, programming, digital content, marketing and communications, as well as international affiliate sales. She reports to Schouela as a part of Blue Ant Media’s corporate management team.

Schouela meanwhile will continue to report to Michael MacMillan, CEO and co-founder, Blue Ant Media, who said: “These promotions ladder up to Blue Ant Media’s commitment to streamlining its core priorities, which include content production, ownership and exploitation in all its forms. Jamie and Carlyn have proven track records building successful media brands in North America and around the globe. I am pleased to see them at the helm of our channels business, propelling our company forward in our ever-changing industry.”