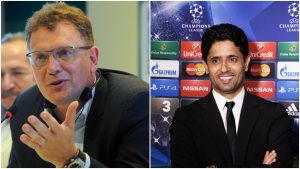 Jerome Valcke, the former secretary of football’s governing body FIFA, has gone on trial in Switzerland alongside BeIN Sports chairman Nasser Al-Khelaifi over the alleged fraudulent award of TV rights.

Valcke has been accused of exploiting his role at FIFA to award the broadcast rights for the World Cup and Confederations Cup to “media partners that he preferred” – i.e. that he solicited bribes in return for the rights.

Al-Khelaifi, a former Davis Cup tennis player and current president of French club Paris Saint-Germain, meanwhile is one such party and he has been charged with inciting Valcke to commit aggravated criminal mismanagement.

A particular example given in the case was Al-Khelaifi giving Valcke exclusive use of his Sardinia villa for 18 months. Valcke was allowed to stay rent free, with the gift worth an estimated €900,000 – €1.8 million.

Valcke, already banned by FIFA’s ethics committee for 10 years, has specifically been charged by the Swiss court of accepting bribes, aggravated criminal mismanagement and falsification of documents.

Both stated their innocence, while Al-Khelaifi’s lawyers argued that most of the case does not apply to their client. The trial is expected to go on until September 25, with a verdict due in October.

The disgraced FIFA exec’s trial is one of the fallouts from the body’s historical corruption scandal which resulted in the banning of president Sepp Blatter and UEFA president Michel Platini. Swiss prosecutors picked up the pieces following the 2015 scandal, and has gone after Valcke, who spent eight years as secretary general between 2007-2015.