Eastern European SVOD subs to double, but growth of US streamers will be minimal 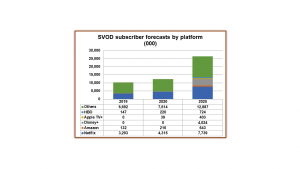 Eastern Europe has been predicted to surpass 26 million SVOD subscribers by 2025, with Russia continuing to be the largest market in the region, having recently overtaken Poland.

According to Digital TV Research, the region will reach 26.42 million paying SVOD subscriptions by the mid-point of the decade. That is an addition of 16 million new subscriptions, up from 10.26 million recorded by the end of 2019.

Russia will add 4.8 million, more than doubling its 2019 total to 8.8 million, while Poland will settle as the second-largest Eastern European SVOD market with 8.7 million.

Unsurprisingly, Netflix will more than double its 2019 of 3.1 million subs to reach 7.7 million across the region.

Disney+ will be the second biggest, emerging past Amazon – which will have a little more than half a million subscribers – to exceed 4 million by 2025.

The research also firm predicts that HBO, which already has a pay TV and small SVOD presence, will hit 724,000 – though this could be improved should the WarnerMedia-owned broadcaster launch HBO Max in the market.

While Western streamers will grow, Simon Murray, principal analyst at Digital TV Research, said: “Although it has plenty of home-grown players, Russia’s SVOD sector will remain held back by the limited presence of foreign platforms. These platforms will not make great inroads into Russia. The Russian regulator introduced a 20% foreign ownership equity limit on OTT platforms.”