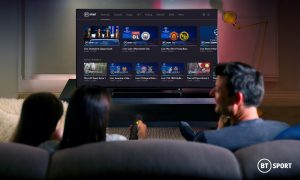 Launching on these devices and platforms ahead of the new Premier League season this weekend means that the BT Sport App is now available on a range of devices that includes the Samsung smart TV, Sky’s Now TV, Sony PlayStation, Xbox, Google Chromecast and Apple TV, as well as mobiles, tablets, BT TV, Sky, TalkTalk and Virgin Media.

BT Sport customers who have the necessary BT subscription plus a 4K capable Fire TV, Roku streaming device, or a 4K device running Android TV such as some TV sets from Sony, Phillips, TCL, Sharp, Cello and JVC, will be able to access BT Sport Ultimate, a channel providing regular live sport in stunning 4K with High Dynamic Range (HDR).

Existing BT Sport customers with access to the app for large screen devices will be able to access BT Sport on the new devices and platforms at no extra cost, allowing them to watch live, catch-up and on-demand sport, and, have a second screen to watch two livestreams simultaneously.

New customers can access the app in a range of ways including BT Sport Monthly Pass, which is available for a £25 monthly fee with no contract. BT said that over the next month, the pass will offer live matches from the Premier League, Gallagher Premiership Rugby, European rugby’s Champions Cup and more.