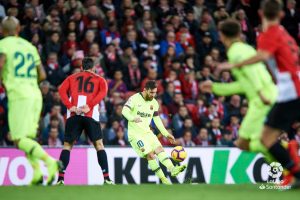 Despite its stop start nature and the current economic crisis, the 2019/20 La Liga season saw increased revenues from TV advertising.

According to La Liga international development director Oscar Mayo, the league hit €2.1 billion in ad revenues alone. Mayo attributed this to the short videos played before matches and during interruptions which are modified to show different brands in different regions. Revenues also came in from billboards.

Mayo also said that the league has already secured €110 million in revenues from short ads and sponsorships for the coming season, which kicks off on September 12. The exec also noted that more than 40% of its ad revenues will come from outside Spain for the new season, up from just 8% in 2015.

The 2019/20 campaign was punctuated by a prolonged break as a result of the coronavirus pandemic and restarted in the second week of June. Mayo added that its TV audience rose 48% post-lockdown in Spain, with increases of more than 100% in countries such as Belgium and South Africa.

Mayo said: “With strong viewership, companies keep us in their communication and marketing plans, even though they cut spending overall.”

However, with Spanish teams performing poorly at the Champions League contrasting to the rise of teams from France, Germany and England, and with the likely imminent departure of the irreplaceable Lionel Messi from Barcelona, there have been concerns from pundits that La Liga’s stature may dip in the coming seasons.