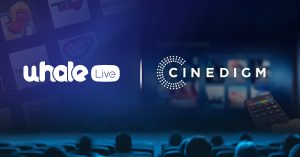 OTT entertainment networks and content provider Cinedigm has announced a new partnership with Chinese CTV maker Zeasn that will bring its channels and content to millions of Whale OS sets around the world via its newly launched AVOD platform.

Whale OS, the proprietary smart TV operating system from Zeasn, is currently deployed by a number of high profile TV manufacturers including Philips, Magnavox and AOC.

Tony Huidor, general manager of Digital Networks at Cinedigm, said: “As we have seen with the worldwide success of Netflix, Disney+ and others, we are experiencing a dramatic transformation in how movies and television content is distributed and consumed across the globe. As more and more content is streamed directly into the home, we are pleased to extend our partnership with ZEASN and become a key content provider for them. As such, this partnership gives us a strategic advantage by providing a direct means of launching our OTT channels in various formats worldwide and reaching a global audience.”

Zeasn CEO Jason He, said: “Cinedigm has played a leading role as the premier independent content distributor in this market segment, and we’re extremely excited to deliver their premium contents through our Ad-supported live streaming service WhaleLive to all the users around the world. This partnership further improves the streaming experience on our Whale Eco, we will continue to provide our partners with leading technologies, tools and expertise to help them to scale with speed, while delivering compelling customer experiences all over the world. ”