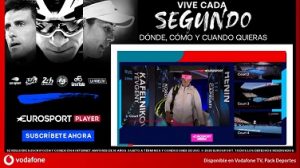 The move will enable Vodafone TV customers to watch Eurosport’s coverage of the US Open and Roland Garros tennis, the major European cycling races – the Tour de France, Giro d’Italia and Vuela a España, the Le Mans 24 hours race and other sporting events on their TVs and on multiple devices.

Vodafone is making Eurosport Player available through its TV set-top as well as via its TV service to other devices. The service will be included as part of Vodafone’s sports package, which already includes access to Eursport 1 and 2, at no additional charge.

“The exceptional circumstances that we are living through have resulted in a concentration of the majority of most anticipated international sporting events of the year in the coming months. With Eurosport Player on Vodafone TV, sports fans are going to be able to experience several months filled with emotion, in which they will be able to decide how, when and where they want to follow each and every second of the big world competition in tennis, cycling and motorsports,” said Antonio Ruiz, senior vice-president and director-general of Discovery for Spain and Portugal.

“A very singular sporting season is starting in which, over the next few months, our customers with the sports pack will be able to enjoy the most anticipated sporting competitions of the year and furthermore to watch them in exceptional quality thanks to Eurosport Player and the multiple personalisation options that it offers. Without doubt, a perfect complement to our television offering that is continually being enriched so that our customers can always see content that is better adapted to their preferences,” said Ignacio García-Legaz, director of Vodafone TV.