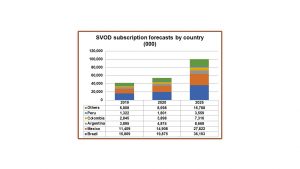 Latin America is predicted to reach over 100 million SVOD subscribers by 2025.

According to Digital TV Research, the territory will reach 100.35 million subs by the mid-point of the decade, up more than double from the 2019 total of 42.15 million.

It is expected that Brazil will continue to be the market leader at 36 million subs by 2025, up 20 million from 2019. Mexico will similarly continue in second place with 28 million subscribers, up from 11,4 million in 2019.

Other countries including Argentina, Columbia and Peru will all grow at a similar rate in third, fourth and fifth place respectively and seeing their subscriber totals more than double by 2025.

The report adds that Netflix will continue to grow as the market leader, with 47.4 million subscriptions by 2025, up from 31.4 million in 2019. However, its dominance will decline due to the launch of a number of high-profile streamers, including Disney+ which will roll out on November 17. Disney’s SVOD is expected to hit 25 million subscribers in Latin America by 2025.

Simon Murray, principal analyst at Digital TV Research, said: “Latin America will enjoy a wave of US-based platform launches over the next year. Disney+ will start in November. Hulu, HBO Max and ViacomCBS are all expected to start during 2021. These launches come despite poor economic conditions.”