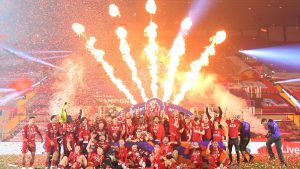 The English Premier League is reportedly considering a 180-turn on its decision not to show all matches of the upcoming season while fans are not permitted into stadiums.

According to the Times, the UK government is pushing the league to change its stance on not showing all the matches played behind closed doors over fears of over-saturation.

Last week, the league announced an expanded rights deal with 20 additional matches spread across Sky Sports, BT Sport and Amazon Prime Video, but that has evidently not been enough to satisfy demand ahead of the upcoming season with more than half of matches still not available for domestic broadcast.

Fans will not be allowed back into stadiums before October, and even after then matches will be played with a limited capacity crowd.

As such, the paper reports that the league is holding talks with the British government about allowing fans to view games which are being played behind closed doors. It adds that the financial deals between the league and its broadcast partners are unlikely to be affected, and that Sky et al. will not have to pay any more in the event that they are given more matches.

The English Premier League finished the 2019/20 season in a condensed format after the UK’s lockdown was lifted, and all matches were broadcast for the first time ever – including more than half of the matches being available for free and a number being broadcast on the BBC.

This at the time was however considered an extraordinary measure and not a precedent-setting decision.

Still, pressure from fans combined with the example of the English Football League to show all of its matches may add pressure on the League to soften its stance.

Interest in the league is set to ramp up following several high profile players joining top English clubs, including the prospect of Barcelona’s Lionel Messi being reunited with former coach Pep Guardiola at Manchester City and German goal machine Timo Werner lining up in the blue of Chelsea.