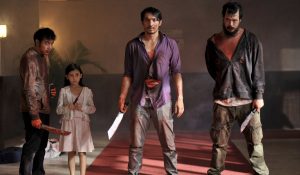 Netflix original The Night Comes for Us

Netflix has announced the addition of Bahasa Melayu support as it continues its drive into Southeast Asia.

The streaming giant said that it has launched its UI in the Austronesian language, which enables members to navigate the UI, read title names and synopses, and watch shows and movies with Bahasa Melayu subtitles and dubs.

Users can switch their profile to Bahasa Melayu from the Language option in the ‘Manage Profiles’ section on their desktop, TV or mobile browsers, with the company promising a complete Netflix experience “from sign-up to search rows, collections and payment.”

It also added that members outside of Malaysia will also have the option to switch their user interface to Bahasa Melayu.

A spokesperson for the streamer said: “Netflix believes in giving members control over their entire entertainment experience, and we are delighted that they are now able to choose to enjoy Netflix in Bahasa Melayu. This surely will improve their viewing experience and better suit members who prefer consuming Netflix in their national language.”

Southeast Asia has become something of a battleground for Netflix, as it attempts to capitalise on a market with a growing appetite for streaming services.

In a recent interview, Netflix director for product innovation Ajay Arora confirmed as much, saying that the company would ramp up its local content and enhance its mobile-only plans for the region.

He said: “What we see in Southeast Asia is that it’s a very mobile-centric market,” and that it would look to continue capitalising on this consumption method.”

This comes at a time when Disney is set to expand its SVOD Disney+ into the region via Hotstar and in partnership with Indonesian state-owned mobile internet service provider Telkomsel.

Disney this week announced competitive pricing at a fraction of Netflix’s monthly cost, and confirmed the addition of more than 300 local movies including Sabar Ini Ujian, Pelukis Hantu and Warkop DKI Reborn 4, along with first-look streaming for movies in Indonesia’s superhero franchise the Bumilangit Cinematic Universe.

Disney+ will launch in Indonesia on September 5 and will expand to other countries in Southeast Asia in the coming months.