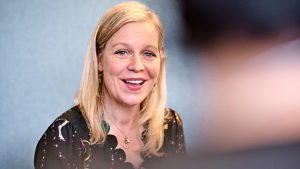 The role of BBC One and the BBC iPlayer as a good for the public has been highlighted by Charlotte Moore, BBC Director of Content.

Speaking at a digital iteration of the Edinburgh International Television Festival, Moore announced a number of high-profile commissions for the channel, including documentaries on racism and the coronavirus in the UK.

During her speech, Moore said: “2020 has been unprecedented, and while the pandemic has had a devastating impact on so many, it has also highlighted the power of television and the valuable role that BBC One plays in people’s lives.

“BBC One has increased its weekly reach and time spent so far this year compared to the same period last year by doing what it does best; bringing the nation together with record numbers coming to our programmes. More young and diverse audiences turned to BBC One in uncertain times for information, entertainment, advice and support. And the crisis further underlined the public’s appetite for shared experiences and great stories.”

Moore also spoke of the record-breaking numbers for on demand catch-up service BBC iPlayer, saying: “The role of iPlayer came into its own; firmly establishing itself as an entertainment destination in its own right as viewers with time on their hands were able to see the full extent of the content available to them.”

The BBC has spent the better part of a year on the defensive against a Conservative government which has repeatedly attacked its politics and funding model.

Moore meanwhile argued that the flagship channel is “unique” in how it reaches the nation. She said: “[BBC One] provides a live schedule that talks to people in the moment with content that feels relevant to all of us and reflects a changing modern Britain. BBC One’s unrivalled commitment to creativity, diversity and risk taking is the gateway into growing iPlayer. Audiences come to be informed, educated and entertained – and we offer a range that put simply, only the BBC is able to.”