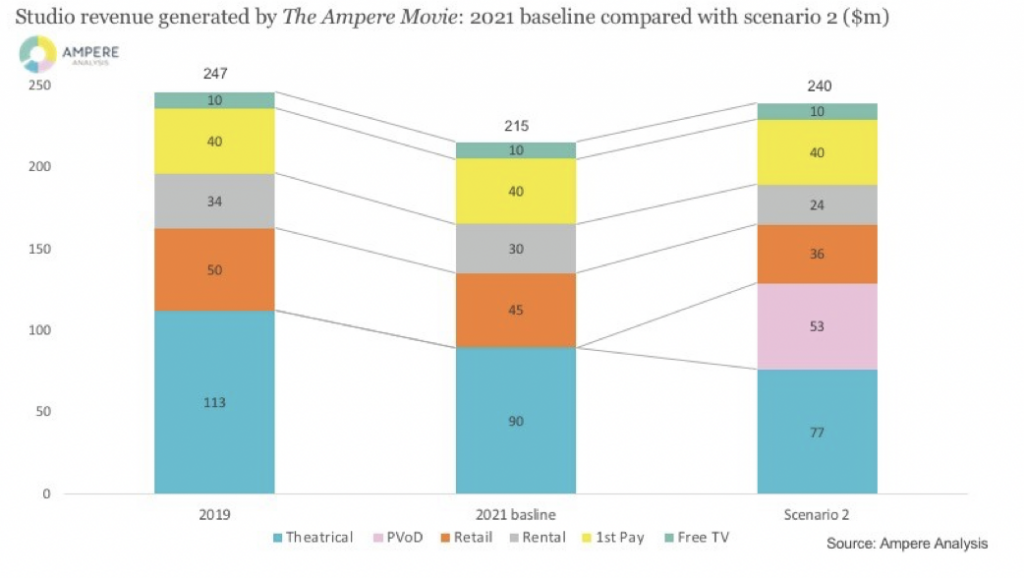 Ampere cites Disney’s decision that new release Mulan will not be released theatrically but will be available to watch as a premium release on streaming service Disney+ as evidence of which way the wind is blowing.

In a post-COVID world, Ampere found that an accelerated PVOD window (Scenario 2 in the chart), like the deal Universal and AMC agreed, is the most stable for exhibitors and studio groups, offering comparable returns for cinemas and increased revenue for the studio on mid- and lower- tier releases. Top-tier titles are likely to be better monetised via traditional windowing models, however.

Under the deal, Universal’s titles may now be distributed through PVOD 17 days following their debut in AMC’s cinemas.

Ampere found that a model where PVOD completely replaced the theatrical model, such as was the case with Mulan and Universal’s Trolls World Tour, would be riskier.

The research outfit argued that high-end blockbuster titles, which are typically able to obtain greater cuts of box office revenue, and international releases would be more likely not to benefit from a pure PVOD approach.

Peter Ingram, Analyst at Ampere Analysis said: “Looking forward, Ampere believes some of the major studios will adopt split strategies that can utilise PVOD while maintaining the benefits of theatrical distribution. Most of the studios have been experimenting with strategies during lockdown that completely eschew the theatrical window. However, despite the change we are expecting to the cinema market, theatrical remains one of the best revenue streams for titles throughout their life cycle. Not only do most people see the film in its theatrical window, but tickets are charged on an individual basis. By comparison, when a film is bought via PVOD, or watched via an SVOD service, it can be shared with friends and family under a single transaction.”