Mediapro’s new French football offering, Téléfoot, is set to go live on Monday with three distinct offers and three distribution deals in place – with SFR, Bouygues Telecom and Apple – to help it achieve its goal of 3.5 million paying subscribers to achieve profitability. 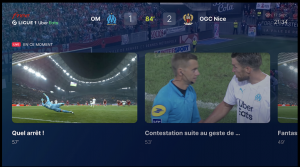 Meanwhile, Free, one of the three major TV platform operators with which Mediapro has yet to strike a deal – though there is speculation that one is imminent – has announced its own football offering. This is a mobile and set-top app that will surface highlights of Ligue 1 and Ligue 2 matches – Free Ligue 1 Uber Eats – based on its acquisition of a highlights package for the next four seasons.

Mediapro’s new service is launching amid uncertainty about the schedule of matches of its prime property, France’s Ligue 1, with the season’s first fixture between OM and Saint-Etienne postponed at the last minute because of a COVID-19 scare.

Mediapro also faces the challenge of premium football rights being split between four players – Téléfoot, Canal+, BeIN Sport and Altice France’s RMC Sport – amid scepticism that enough paying customers will sign up to enable it to recoup its outlay of over €800 million for eight Ligue 1 and eight Ligue 2 matches per day, including the best 10 Ligue 1 matches of the season.

Téléfoot’s main offering is a package comprising Ligue 1 and Ligue 2 matches, and UEFA Champions League – for this season only courtesy of a deal with Altice France – and Europa League matches, for €25.90 with a 12 months contract, or €29.90 without. A 12-month prepaid offering for €269.90 is also available, representing a discount of €40.90.

Mediapro is also offering a bundled offering with Netflix for €29.90 with a 12-month contract.

The group’s third offering is a mobile-only package of Ligue 1 and Ligue 2 but no Champions or Europa League matches, available on smartphones and tablets only, for €14.90 a month.

Meanwhile Free’s offering will be available on smartphones and on the Player Freebox for TV viewing – the latter being available to its s Freebox Pop, Freebox Delta, Freebox One, Freebox Révolution/Révolution avec TV by Canal and Freebox mini 4K subscribers.

Subscribers will receive notifications on their smarthphone of goals and other highlghts, enabling them to link to the highlight video.

The app will also feature compilations of goals and highlight moments from games, along with magazine content, interviews and podcasts.

To promote the app, Free is making coverage of the first two match-days of the championship available free of charge to anybody in France.