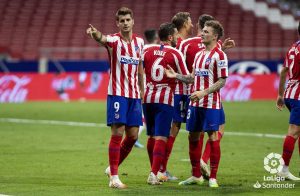 It joins Star Times, which has the French rights, and SuperSport, which will broadcast the league in all languages apart from Arabic and French.

The Vivendi-owned broadcaster will offer coverage of the league to its customers in sub-Saharan Africa, Madagascar and Mauritius in a four-season renewal.

Canal+ also holds rights in the region to The UEFA Chanpions League, Ligue 1, the English Premier League, and Italy’s Serie A.

“We are pleased to bring French-speaking fans of LaLiga another exciting way to discover the competition in Sub – Saharan Africa, while extending our successful partnership with Canal+. These are important steps to continuing our global growth together with a historic partner who has broadcast our games in this territory for years”.

Jacques du Puy, President of Canal+ International, said: “We are very happy to welcome LaLiga for 4 new seasons, one of the championships most appreciated by our African subscribers, and which completes our incomparable offer in terms of international football”.