Parrot Analytics: The Umbrella Academy top of the class in Finland 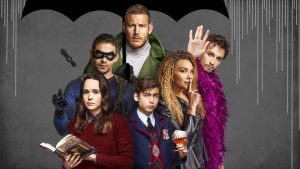 Netflix’s comic book adaptation The Umbrella Academy was the most popular title in Parrot Analytics’ originals in-demand chart by a huge margin of almost three times in Finland for the week ending August 11.

The time-bending Netflix series starring Ellen Page and based on the comic book series created by My Chemical Romance singer Gerard Way, attracted 21.1 times the demand of an average show. 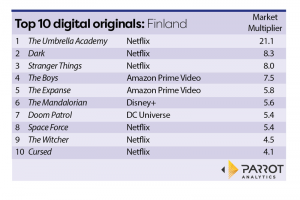 Disney+ original The Mandalorian continues to be a hit with audiences in sixth with 5.8 times the demand of an average show, while DC Universe continues the franchise trend with Doom Patrol in seventh.

Netflix rounds out the remaining three titles in the list, with Space Force, The Witcher and Cursed all attracting between 4.1-5.4 times the demand of an average show.