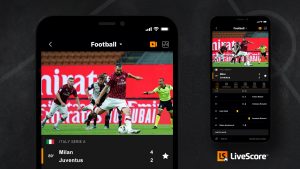 Sports event tracker LiveScore has continued to expand its streaming rights portfolio with the announcement of an expanded set of league and competitions that it will broadcast free-to-air for the 2020-21 football season.

Following an OTT launch in June via a sub licencing deal with Premier Sports, the pair will expand their relationship to stream hundreds of matches live via its app.

Most noteworthy will be Italy’s Serie A, of which LiveScore will broadcast 306 matches from the coming season – representing 80% of the total fixtures being played – via its app in the UK and Ireland for free.

While Serie A is the headline competition, LiveScore will also carry 102 matches from Portugal’s Primeira Liga, 142 matches from Holland’s Eredivisie and 60 matches from the Chinese Super League.

In addition to those leagues, the app will show 21 matches from the Coupe de France, 20 UEFA Champions League and Europa league qualifiers and 70 matches in the CONCACAF FIFA World Cup 2022 regional qualifiers. It will also live broadcast all 262 matches from the Copa Libertadores, Sudamericana, Recopa     (CONMEBOL).

Since its UK live streaming launch in June, LiveScore has attracted over 500,000 unique viewers, with its largest being a peak audience of 125,000 for AC Milan’s 4-2 victory over Juventus on July 7. The company said that the app itself has a global audience of 56 million monthly active users, including 2 million in the UK and Ireland.

Ric Leask, marketing director at LiveScore, said; “After a fantastic start for our new LiveScore free-to-air live streaming service, we’re excited that our offering is set to get bigger and better for the new 2020-21 season. As well as returning to the hugely popular leagues in Italy and Portugal, by unveiling a number of new competitions we are continuing to innovate and offer our UK and Ireland audience the most immersive sports coverage possible.”

“This is an important next step for LiveScore as we continue to expand our digital content offering.”