Disney+ series The Mandalorian has proved to be the most popular original show of any of the major streaming services which have launched over the past 10 months.

According to a report from Parrot Analytics looking at the original shows that launched with Disney+, Apple TV+, HBO Max and Peacock, the Star Wars series was the clear favourite among viewers. The report compares the launch weeks of the services and the demand for their original content, gauged by demand versus an average title. 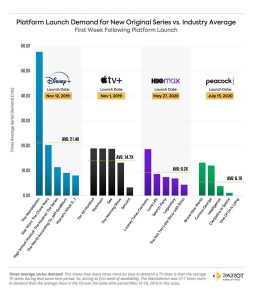 Apple TV+, which launched just under a fortnight before Disney+, proved to be the second most popular streamer for originals, with an average demand of 14.7 times that of a normal show. For All Mankind, Dickinson and See all proved popular with each around 20 times the demand of an average show.

By contrast, the launch weeks of HBO Max and Peacock in May and July respectively were more muted for demand.

HBO Max original Looney Tunes Cartoons was the clear favourite of the two services with around 19 times the demand of an average show, but the streamer only managed 9.2 times the demand on average. Originals Love Life, Search Party and Legendary all saw muted viewership.

Peacock fared slightly worse with big budget Sky co-production Brave New World emerging as the streamer’s most popular show at around 13 times the demand of an average show and animated series Curious George just below. On average, Peacock originals managed 6.1 times the demand of an average show – a number unlikely to change soon with production on its originals being halted as a result of the pandemic.

However, it is worth noting that the latter two services are more built around their extensive catalogues of high profile content rather being built around originals, as is the case with the more limited Apple TV+.