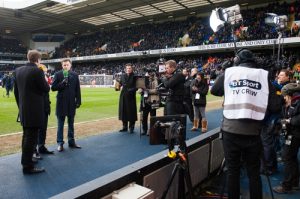 The head of sport at BT has said that the coronavirus pandemic will lead to a correction of broadcast rights valuations.

Speaking to The Guardian, Simon Green predicted that the prices of sports rights will not continue to rise as they have for the past 30 years.

He said: “I personally believe that Covid-19 will cause a correction in the markets for television sports rights which will mean the value will not rise as it has done in the past. I think everyone will be more discerning about what they pay given that the country is facing a potential recession which could leave viewers with less money in their pockets.”

The English Premier League is about to enter the final two seasons of its current rights cycle, with Sky and BT taking five of the total seven available rights packages for £4.46 billion.

The league’s next rights cycle – to be auctioned in 2021 – is likely to be one of significant change. Amazon will likely look to increase its share of the rights following a successful first season with more than 20 matches. DAZN may also look to pick up domestic rights as it establishes itself in the UK market, while a lower valued league may lead Premier League CEO Richard Masters to push on with a potential ‘Premflix’ D2C product.

BT’s Green added: “We want to be able to offer customers value and while it is impossible to say exactly what will happen, there will be a different approach. At BT, we will look at every tender-right that comes along and value it accordingly. What the lockdown highlighted was the importance of live sport: when it returned with the Bundesliga, our audience over three channels was 750,000 compared to 100,000 before.”

The Bundesliga was the first major sports league to lodge a domestic rights tender in the wake of the pandemic, and saw its value drop by €200 million in a €4.4 billion deal with DAZN and Sky.