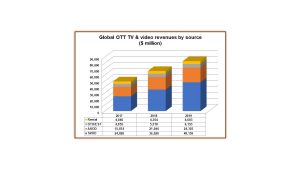 Revenue for the overall OTT market, including SVOD, AVOD, and TVOD, reached US$83 billion in 2019.

According to Digital TV Research, this is a significant increase from the 2018 total of US$67 billion and US$50 billion charted in 2017.

Broken down by segment, SVOD was the largest contributor at US$48.2 billion, followed by AVOD at US$24.3 billion. Download-to-own (DTO)/Electronic sell-through (EST) was at US$6.2 billion while rentals were at US$4.7 billion. The latter category will surely see major growth in 2020, with many major film distributors like Universal and Disney shifting many of their major cinematic releases to home viewing in light of the coronavirus pandemic.

While SVOD continues to dominate, so too do its major players. The report said that the top five major streamers – Netflix, YouTube, Amazon Video, Hulu and the relative newcomer Disney+ – represented 72% of all revenues across the 138 countries covered.

Simon Murray, principal analyst at Digital TV Research, said: “The US added $8 billion in revenues in 2019 – half of the global additions, with China up by US$1 billion.”