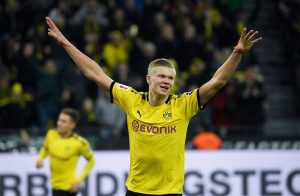 In a boost for football broadcasting, the German Bundesliga has said that it is planning for fans to re-enter stadiums across the country’s top two tiers from the start of the new season in September.

The Bundesliga was the first top European league to resume playing in the wake of the coronavirus pandemic on May 17, a full month before the English Premier League made its comeback.

German Football League (DFL) chief exec Christian Seifert said that the body has given clearance for the top 36 clubs to partially fill stadiums for the 2020/21 season.

Football broadcasts post-lockdown have been criticised by pundits and fans alike as feeling like non-events due to the lack of live audiences, with the artificial crowd noises receiving mixed responses.

Now, Seifert has submitted plans to the German government for fans to be allowed re-entry into stadiums in a limited capacity.

The country’s health ministers and state representatives are set to meet next week, but the exec told German reporters that he does not “expect or demand anything” and that the body is ready “to take this small step when the time comes”.

Seifert said: “If and when fans will return to the stadiums is not a decision for the DFL but for the political leaders. The priority is not full stadiums but the health situation. We should not take unnecessary risks but we should also not capitulate and just expect it to go away.”

The upcoming season will be the last under the current rights cycle, with Sky and DAZN winning the majority of the rights for the 2021-24 seasons in a cut price deal.

The current deal which covers Germany’s top two leagues runs through until the end of the 2020/21 season and was worth €4.64 billion. In the current economic environment, the rights dropped by approximately €300 million for the latest deal.