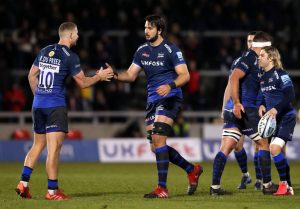 The owner of professional rugby union club Sale Sharks has said that Premiership Rugby will look for a dedicated linear channel as a part of its next broadcast rights deal.

Simon Orange, the owner of Sale Sharks, said that plans for a dedicated channel has been discussed by the league’s 13 clubs, with recent reports claiming that current rights holder BT Sport is looking to extend its £40 million per season deal which expires next year.

It is not however certain that BT will resecure the rights should this dedicated channel become a prerequisite for the league.

According to The Daily Mail, Orange said that Sky Sports and Amazon Prime Video could also be potential suitors, with the former already having dedicated channels for the English Premier League and Formula One.

He said: “A dedicated rugby channel has been considered and, if that went through, there would be more rugby content, which would be great for the sport and the fans. Hopefully between Sky, BT, Amazon and OTT platforms, we should be able to start increasing our income.”

Such a plan was also commented on by Exeter Chiefs CEO Tony Rowe, who said that a channel could come “within a couple of years” and that “the sport doesn’t have enough money coming into it” from broadcast revenues.

Rugby is seeing an increasing level of interest from audiences following a record-breaking World Cup earlier this year. According to governing body World Rugby, more than 857 million people watched the tournament from Japan. This represented a 26% increase from the tournament hosted in England in 2015.