The average viewer has 1.59 SVOD subscriptions as global total continues to rise 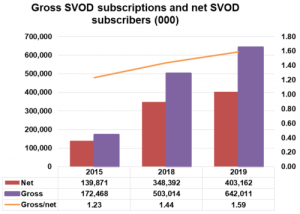 Global SVOD subscriptions grew by more than a quarter in 2019, a year with a number of high-profile streaming service launches and an ongoing trend towards cord-cutting.

According to Digital TV Research, the number of gross subscriptions grew by 28% in the year to 642 million up from 503 million the year prior.

Showing the proliferation of streaming is the rapid growth since 2015, when there was only a grand total of 172 million SVOD subscribers globally.

Country-wise, the US overtook China as the gross SVOD leader, though the total is close with about 200 million each. Between them, the countries accounted for 63% of all SVOD subscriptions by the end of 2019. Subscriptions increased by 43 million in the US and 35 million in China, thanks in no small part to the monumental success of Disney+.

It is likely that the US’s position will be enhanced in 2020 with the high profile launches of WarnerMedia’s HBO Max and NBCUniversal’s Peacock.

A further eight countries had at least 10 million SVOD subscriptions by the end of the year, accounting for 84% of the total

Simon Murray, principal analyst at Digital TV Research, said: “The number of gross SVOD subscriptions increased by 139 million in 2019 to 642 million – having grown by a similar amount in 2018.”