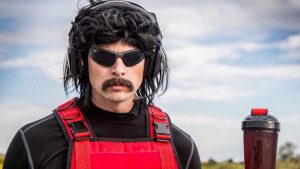 Many were confused when Dr. Disrespect’s profile showed up as inactive on June 26, with neither Twitch nor the streamer making any concrete statement about Beahm’s status. Dr. Disrespect tweeted the next day that he had received no justification from Twitch, and now a little more than a month later he is looking to legal recourse.

In an interview with PC Gamer, Dr. Disrespect said that he would not return to Twitch even if his ban was lifted and added that he was “trying to take the best and appropriate steps as possible, and there are things behind the scenes in terms from a legal standpoint.”

He bluntly stated: “We are considering taking legal action.”

Beahm rose up inside the games industry as a level designer for the Call of Duty franchise, but has spent the past five years streaming on Twitch as his alter-ego Dr. Disrespect.

The brash and controversial character amassed more than 1.5 million subscribers on the platform and, in spite of a number of run-ins with Twitch’s terms of service was one of the top streamers following the loss of Ninja and Shroud.

Many speculated that the permaban was to do with Brime, an in-development streaming platform, and suspicions that Dr. Disrespect was involved with the company. This theory however was batted away by Brime, which held an AMA on 4Chan and denied any association with the player.