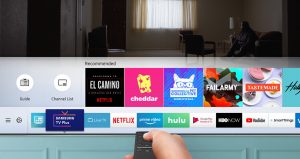 The coronavirus pandemic has been felt in the TV set supply chain, but the impact is likely to be better than initially feared.

According to TrendForce, total shipment of TV brands in 2020 is expected to reach 214.11 million units, a 1.7% decrease year-over-year, but a 4% increase from a previous forecast in March.

The research firm said that the forecast suggests that the ‘stay-at-home’ economy is seeing increased momentum.

This is also partly due to the fact that the second half of the year is typically busier for TV set sales, representing 54% of all sales over the past decade. H1 normally sees 46% of all TV sales, but Trendforce said that the first half of 2020 was 4-5% less than the average, with brands betting on economic recovery in the autumn and winter months.

The report goes on to note that H1 saw a 7.7% year-over-year global shipment reduction, shipments actually grew by 20% in the US as a result of stay-at-home orders, stimulus bills and unemployment benefits.

This growth was felt by value brands, with VIZIO being one of the biggest winners. The TV maker is expected to increase its TV shipment by 17.6% year-over-year. Other low-cost Chinese brands such as TCL and Hisense have similarly raised their shipment numbers.

By contrast, the report says that more premium Japanese brands like Sony and Panasonic will chart a significant drop in shipments across the year.

Lastly, the report predicts that TV brands will look to increase their panel procurement efforts in Q3 to raise their market shares and hit their annual targets. This will lead to an increased demand for panels and a higher price of 25-30% higher than their equivalent point in 2019.  TrendForce concluded that, despite the proactive push by TV brands in Q3 and increasing panel prices will make it difficult for vendors to meet their profit targets.