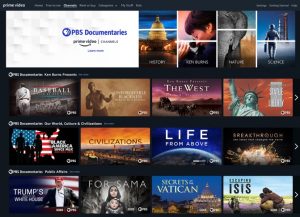 PBS has become the latest US broadcaster to announce the launch of a new OTT service.

Launching on August 4 via Prime Video Channels, PBS Documentaries will provide users with access to a library of critically acclaimed documentary content for US$3.99 per month.

The channel will serve as a separate offering to the free PBS Video App, and will launch with almost 1,000 hours of programming including Ken Burns’s landmark series The Civil War and Country Music, along with Stanley Nelson’s The Black Panthers: Vanguard of the Revolution.

The broadcaster noted that the Ken Burns collection will also be included in the premium PBS Passport service which is available to donors in the United States that contribute an annual tax-deductible gift of US$60 or more, or an ongoing gift of $5 per month as sustaining members. (PBS is the US’s public broadcaster, but unlike countries like the UK which operate with a licence fee, the network is entirely reliant on donations.)

“This channel will not only help bring engaging stories about life in all corners of our country to a new audience, it will provide needed revenues to sustain public broadcasting’s public-private partnership model for the benefit of all stations and the communities they serve.”

Acclaimed documentarian Ken Burns said: “We had long hoped to be able to have all of our films available in one place so the public would have access to the body of work. We’re thrilled that this is now possible thanks to the efforts of PBS Distribution and Amazon to launch the PBS Documentaries Prime Video Channel and also through PBS’s Passport initiative that allows viewers to support their public television stations.  Both will also contribute to the larger mission of PBS.”

The launch will come as a boost to Amazon, which is pushing broadcasters and operators to offer their services within Amazon Prime Video Channels rather than their own apps.

This direction however has set Amazon at odds with both NBCUniversal and WarnerMedia, whose recently launched apps Peacock and HBO Max are currently unavailable on Fire devices.

Speaking during its latest earnings call, AT&T CEO John Stankey said that Amazon was “treating HBO Max and its customers differently on how they’ve chosen to treat other services and their customers” and that the company has “tried repeatedly to make HBO Max available to all customers using Amazon Fire devices.”