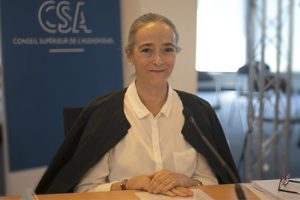 French media regulator the CSA has given Delphine Ernotte-Cunci a new five-year term as director-general of France Télévisions, the first time an incumbent has had their mandate extended in this way.

The watchdog said that it had chosen Ernotte for a second term on the basis of her competence and experience and its analysis of the strategic projects presented by the eight candidates for the role at interviews this week.

By extending Ernotte’s mandate, the CSA has given a vote of confidence in what it characterises as her project to transform the public broadcaster in the context of a rapidly changing environment, in a financially prudent way.

It also praised her plans to focus on content creation, a major part of the strategic project she presented at the interview, and to develop the pubcaster’s offering for children and young people and in news.

Another element of Ernotte’s plan that helped secure the appointment was her continued focus on digital development, exemplified by her championing of long-delayed SVOD offering Salto.

In her submission to the CSA Ernotte has placed emphasis on doubling investment in children and young people’s programming and on maintaining France 4, the kids and youth TV service that was pencilled for closure in the autumn but has been granted a reprieve as a result of its role during the coronavirus lockdown.

She has also placed emphasis on greater cooperation between French domestic broadcasters, including joint project Salto, and between European Union pubcasters at an international level.

During her interview, Ernotte was challenged over perceived failure to meet commitments made in 2015 to further the cause of diversity at the pubcaster. However, CSA president Roche-Olivier Maistre expressed faith in her expression of determination to persevere.

Ernotte was the first director-general to be appointed by the CSA, and the first incumbent to see her term extended. Prior to 2015, the appointment was the prerogative of the French president.

Of the seven other candidates shortlisted, Christopher Baldelli, the former president of RTL and ex-director-general of France 2, was seen as the most serious competitor to Ernotte. Baldelli had presented plans for the launch of a cultural daily show and to revitalise news service Franceinfo as well as for the shake-up the current management of channels.

During his interview he questioned whether French citizens would be prepared to pay for access to public service programming and emphasised the need for differentiation between France Télévisions and pay platforms, as well as commercial channels.