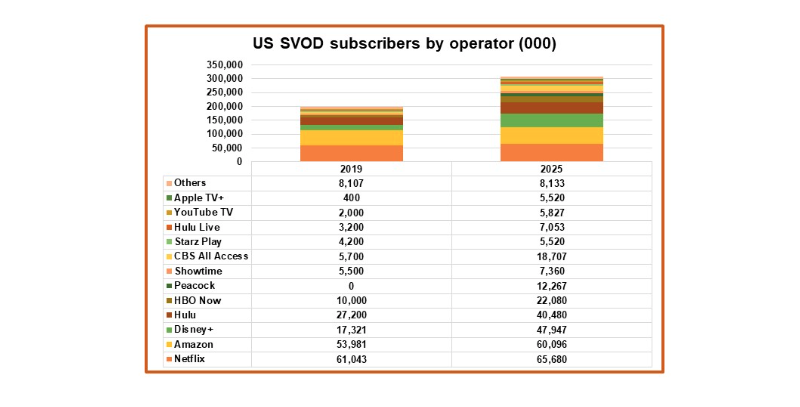 Paying subscribers to VOD services in the US will exceed 300 million by 2025.

According to new figures from Digital TV Research, the number of US SVOD subscribers (not including sports services) will climb from 199 million in 2019 to 307 million by 2025.

Netflix will continue to be the leading player with 65.68 million subscribers, though its progress has become stunted – this is only an increase of just over 5 million from its current count of 61.04 million users. Amazon will reinforce its second place position, growing from 53.98 million to 60.09 million users.

Disney+ is set to continue its meteoric rise, growing from a year-end 2019 figure of 17.32 million users to 47.95 million to become the third most subscribed-to SVOD service. Disney will also occupy fourth place with Hulu, which will grow from 27.2 million to 40.48 million users. This will give Disney a combined 88.43 million subscribers, though many of those users will be subscribed to both services.

Upcoming services HBO Max and NBCUniversal’s Peacock are expected to see solid growth in their first five years in fifth and sixth respectively (22.08 million and 12.27 million).

The firm also expects that ViacomCBS’s strategy to replace CBS All Access with an international ‘House of Brands’ streamer will pay off. CBS All Access ended 2019 with 5.7 million subs, but that is predicted to jump up by over 300% to 18.7 million in 2025.

Apple TV+ however is expected to have a more muted first half-decade, with its subscriber numbers only reaching 5.52 million by the end of 2025.

“A dozen platforms will have more than 5 million paying subscribers by 2025 – revealing just how far ahead in terms of choice the US market is compared with the rest of the world. Growth for established players such as Netflix and Hulu will be muted due to intense competition from younger rivals such as Disney+, Peacock and the augmented CBS All Access.”

The study also examined the growth of cord-cutting services which serve as live TV competitors to traditional cable TV. Hulu Live will be the most popular, growing from 3.2 million to 7.05 million, with YouTube TV growing from 2 million to 5.83 million in 2025.