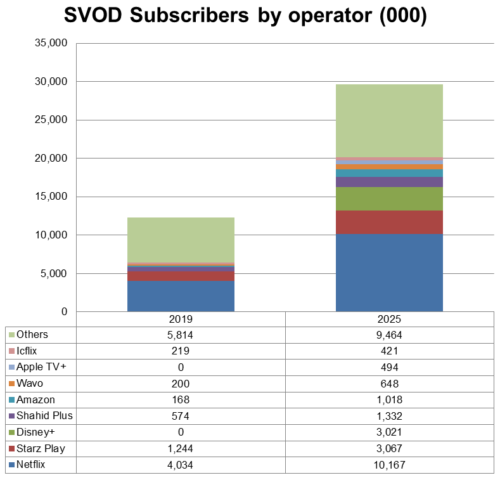 SVOD revenues in the MENA region are expected to reach close to US$3 billion by 2025.

According to new figures from Digital TV Research, this represents a significant increase of US$2.1 billion over the period of 2019-25 to reach US$2.9 billion.

It is estimated that Turkey will be the largest individual market with US$908 million per year by 2025. In second will be Saudi Arabia with US$563 million, and Israel in third at US$470 million.

Unsurprisingly, Netflix will be the largest SVOD player in the region with 38% of the 2025 total, with its subscriber base more than doubling from 2019 from 4.03 million to 10.2 million.

Starzplay will continue to grow as the second largest, though its growth will be more modest – increasing from 1.24 million to 3.07 million. Disney+ will see the largest growth to become the third biggest player, increasing from no presence at all to ataining 3.02 million subscribers by 2025.

Other players, such as Shahid Plus, Amazon Prime Video and Wavo will all see increases of more than double their subscription base.