White label video streaming publishing solution OKAST has launched HDP-backed Opsis TV on Fransat, a French operator of free DTT via satellite in France. Opsis, according to OKAST, is the first OTT service for digital theatre, offering hundreds of live or on-demand plays. The service will be available to 2 million Fransat viewers.

A strategic partnership between OKAST, which publishes the web and mobile version, and Ngine, which deploys the HbbTV version, resulted in a new version of OPSIS TV, capable of delivering a high-quality TV experience. Xavier Pryen, HDP general manager (publisher of OPSIS TV and DOCS TV OTT services) said: “For Opsis TV, this means developing its audience through the distribution of the service on as many channels as possible. This is an important step in winning new subscribers and thus offering more than ever accessibility to culture for all.”

Bertrand Issard, managing director of Ngine Networks added: “Connected TV applications and HbbTV in particular allow publishers such as Opsis TV to broadcast their content and meet a wide audience.  This approach to broadcasting on all types of screens is a fundamental trend in the current audiovisual industry.” 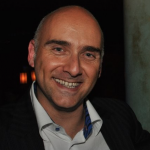 Cédric Monnier (left), CEO OKAST said: ”We are gradually witnessing a replacement of the linear thematic TV channels created with cable and satellite by premium VOD services.  This partnership opens up new opportunities for independent publishers working for culture and gradually renewing the audiovisual landscape.”