Over 300 million pay TV homes worldwide now have the opportunity to subscribe to Netflix through their set-top boxes after the SVOD leader added 15 new partners this year, according to statistics compiled by Ampere Analysis. 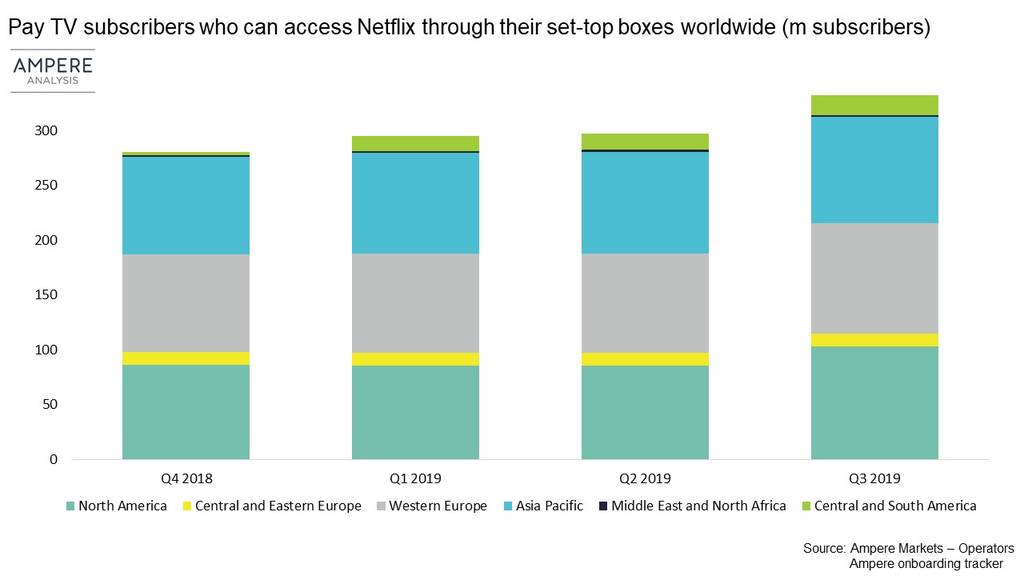 According to Ampere, Netflix has struck over 100 significant partnership deals with pay TV operators to date, giving the streaming giant potential access to nearly half of all global pay TV subscribers outside China.

According to the analyst outfit, at the end of last year three quarters of pay TV subscribers in Western Europe had contracts with Netflix partner operators. Netflix also has a substantial reach through pay TV households in North America, its home region, with as many as 86% of pay TV subscribers able to find Netflix on their operator’s set-tops.

“The increase in the number of pay TV partnerships with Netflix marks a distinct shift in the industry, as more and more of the streaming giant’s traditional ‘enemies’ cosy up through onboarding deals. Interestingly, Netflix has now been onboarded onto all the major pay TV operators in France, a country previously hostile to the US streamer’s arrival,” said Elinor Clark, analyst at Ampere Analysis.

“Netflix has yet to attract many of the large pay TV operators in Central and South America, Asia Pacific (APAC) and Central and Eastern Europe (CEE), though it is steadily working on increasing its reach. These markets (excluding China) play host to almost 400m pay TV subscriptions, and Netflix currently has around 40 million subscribers in these territories, making these key target areas for the streamer to pursue. Of course, Netflix is not the only beneficiary. These partnerships can also be lucrative for pay TV operators, providing them with an additional revenue stream when there may be downward pressure on their average revenue per user (ARPU) and, in some markets, cord-cutting.”