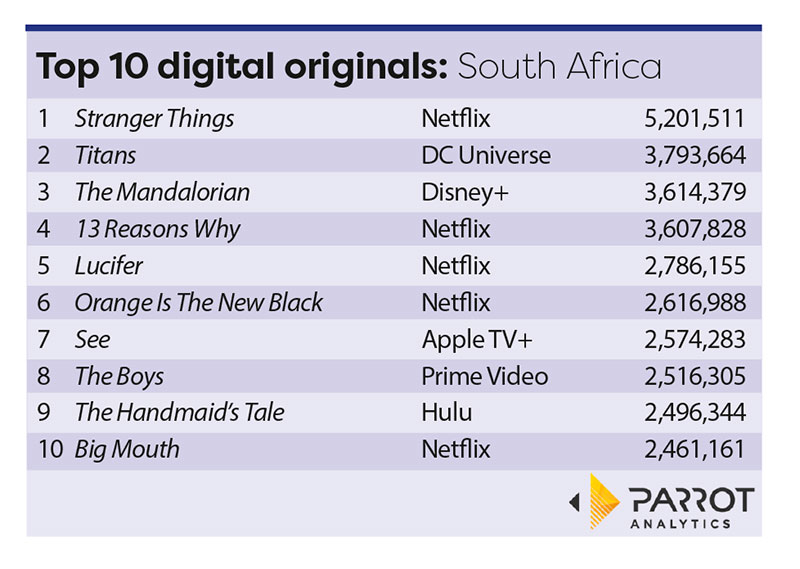 New shows from Disney+ and Apple TV+ have had an impact, but not enough to displace perennial chart-topper Stranger Things from Parrot Analytics’ originals in-demand chart for the week ending November 17 in South Africa.

The Netflix retro sci-fi hit continued its dominance with 5.2 million average demand expressions, while DC Universe’s Titans was in second, with 3.8 million.

Disney’s Star Wars series, The Mandalorian, made its debut in the charts in third with an impressive 3.6 million average demand expressions while Apple TV+’s Jason Momoa-starring See sits in seventh with 2.6 million. Coincidentally, both of these originals star a former Game of Thrones alum in their leading role, with Pedro Pascal playing the titular bounty hunter in the Disney series.

It is also worth noting that Disney+ has only released the first two episodes of its original series, with subsequent releases every Friday, while Apple TV+ launched with the first three episodes of each of its series with a similar release schedule.

While both big-budget shows were expected to be in demand, notable in its omission from the list is Apple TV+’s US$15 million per episode The Morning Show. The broadcast media drama has been heavily promoted by the Cupertino iPhone-maker and stars veritable Hollywood A-listers Jennifer Aniston, Reece Witherspoon and Steve Carrell.

Elsewhere, the list is dominated by the usual suspects from Netflix, such as 13 Reasons Why and Orange Is the New Black, while there is also space for Prime Video original The Boys and Hulu’s the Handmaid’s Tale.