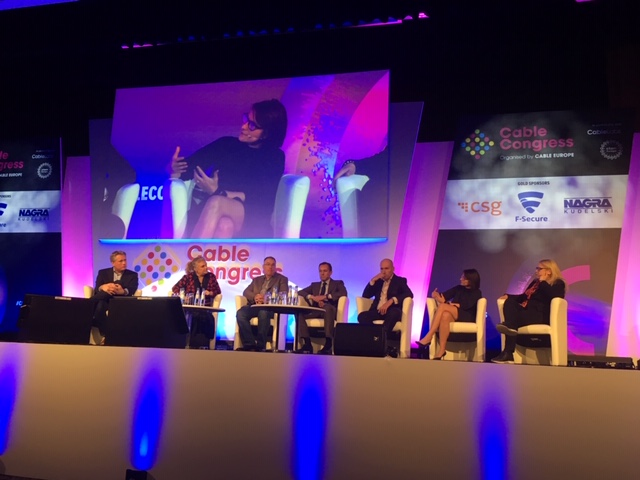 Consensus about the applications and market segments that will drive demand for Gigabit connectivity among cable and technology industry executives is still lacking, if the views of a panel on the topic at Cable Congress are representative of wider industry opinion.

Mark Giesbers, managing director, products at Liberty Global, said he believed that the consumer market would be quicker to take up new services over high-speed networks because cable operators could address these customers directly rather than through intermediaries. He said that home security was an obvious market for cable.

Giesbers said that in relation to the B2B market, offering productivity and security solutions combined with mobile back-up for fixed line connectivity presented “areas of opportunity” for cable.

Challenged on whether consumers actually require Gigabit connectivity at present, Giesbers said that “everyone needs Gigabit speeds though they may not know it yet”. He said that operators had a responsibility to explain to consumers why Gigabit broadband is necessary or useful.

Patrycja Golos, VP of corporate affairs at UPC Poland, said that the cable industry had an opportunity to use Gigabit networks to aggregate specialised services, but that there are challenges on the regulatory side that stand in the way of making money from services. She said that operators would need more flexibility in building their offers, with restrictions currently in place that restricted their freedom to build certain bundled offerings.

Golos said that cable’s sales story was becoming less about speed and more about converged services and fixed-mobile convergence.

Guy Bisson, research director at Ampere Analysis, also speaking on the panel, said that cable had to look for “the next entertainment service” as a key driver rather than connected home applications such as home security, which had proved difficult to market to consumers.

He said the challenge of providing services to drive take up beyond early adopters is that most of the applications are controlled by global players.

Harald Rosch, CEO of Melita, the Maltese cable operator, agreed with Ampere’s Bisson that Gigabit connectivity was currently a marketing-based sale as “no-one needs it” for now, but added that applications would fill this gap within a relatively short period of time.

Rosch said that his company had invested up to 60% of revenues over the last couple of years in developing high-speed connectivity, an investment he said had paid off. He said that Melita now had a reputation for being the best network provider and was able to deliver more advanced services on top of that. However, unlike Liberty Global’s Giesbers, he said that the biggest return in the near future was likely to be from addressing the B2B market.

Charles Cheevers, chief technologist, customer premises solutions, office of the CTO at technology provider CommScope, said that “the fastest speeds in the world are useless if they are not reliable”. The development of services such as connected healthcare would imply a need for much more reliable connectivity he said. Constant monitoring of something critical such as dialysis means a need for “a really reliable service”, he added.

Cheevers said that the key growth areas are “improving education”, using technology to enable assisted home living for the elderly and healthcare applications.

He said that high-speed connectivity was key to all of these applications. He said that operators had an opportunity to build on this to add multiple services to connectivity.

Cheevers said that real-time gaming could be a key drive of take up for high speed services among consumers initially. He said that current OTT TV services were driven by adaptive bit-rate technology, but the ability to deliver existing applications with full bitrate reliably would help drive take up of Gigabit broadband.