The subscription video-on-demand business globally still has room for further growth, despite the view that demand is levelling off as the streaming market matures, according to Ampere Analysis. 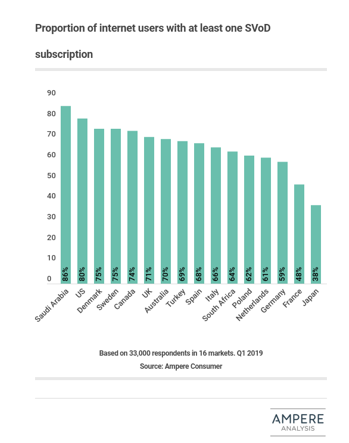 Both Europe and the US have enjoyed subscriber growth, according to Ampere’s latest Barometer. Growth in SVOD subscriptions in the US has resumed after plateauing between Q3 2016 and Q1 2018.

In Europe meanwhile, the proportion of internet users who have a SVOD subscription is lower than in the US, and there continues to be healthy growth in subscriptions.

All but two markets studied enjoyed subscriber growth between Q3 2018 and Q1 2019, with Saudi Arabia, which was up 8.1 percentage points, Australia, up 6.8 points, and Denmark up 6.3 points, enjoying the strongest growth. The Netherlands and Japan are the only markets where subscriber growth has stagnated since Q3 2018.

According to the analyst outfit, there is considerable variation in SVOD uptake between different markets. While at least eight in 10 internet users in Saudi Arabia and the US have at least one SVOD subscription, in Japan and France fewer than half have taken a subscription.

Subscriptions are being driven by younger demographics, with those under 35 over-represented in each market except Saudi Arabia where take up is driven by those aged 45 years and over.

Minal Modha, consumer research lead at Ampere Analysis said: “The growth in SVoD subscribers in both regions will come as welcome news, particularly to those looking to enter the market this year such as Disney and Apple as it shows there is still room for growth and the opportunity to take a share of the revenue.”